Wine Regions of the World – Argentina 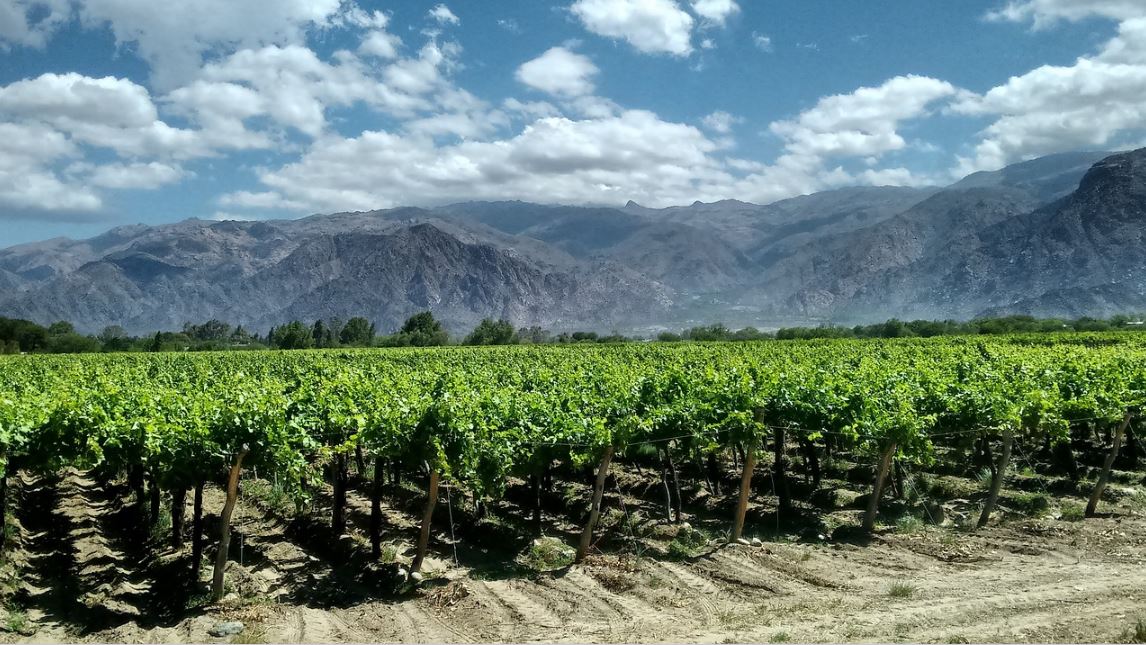 Join me as we depart from the US to take our fifth adventure through top producing wine regions of the world in Argentina. This country is certainly known for its wines because it ranks fifth in the world. As a part of ordinary life in Argentina, you’ll see a bottle or two accompanying most meals. The terroir is responsible for making its wines famous. Large areas of virgin land and micro climates produce extreme temperature tolerant varietals with distinctive taste and quality.

Malbec is the most common. Europe has more or less abandoned this popular variety while Argentina is working hard to elevate it. Flavour profiles are highlighted depending on the climate, soil and region. Malbec is not the only grape succeeding in Argentina so there is recent emphasis on broadening the choices. Let’s explore the most popular regions for a glimpse into the Argentinian wine industry.

We’ll start our adventure in northern Argentina where four regions crisscross the Calchaquí Valleys. This system of mountain valleys formed 5 million years ago. Wines we’ll find in these regions include Bonarda, Cabernet Sauvignon, Chardonnay and Syrah.

First we’ll visit one of Argentina’s most renowned regions, Salta in northwest. Despite having the nation’s most extreme terrain and weather, it’s experiencing significant growth. With freezing cold nights to scorching, sun-filled days, few thought these conditions would be favourable for producing wine. Locals continue to produce world class wines despite high altitudes (some higher than 1,100 metres), and extreme temperature changes.

Second, let’s travel off the beaten path in northwest Argentina to another mountainous region called Catamarca. We’ll be in the midst of the Andes mountain range and prepared for some challenging hiking. There aren’t a lot of wineries in this region buy we’ll find every vista worth the trip. The climate is very dry with lots of sunshine and very low rainfall.

Catamarca’s wine industry is young with plantings of Bonarda, Cabernet Sauvignon, Malbec, Syrah and Torrontés increasing throughout the region.  We’ll savour more concentrated wines with depth of flavor in Catamarca because of the climate and sandy, deep soils with pebbles.

Third up is the province of Jujuy in the extreme northwest, which is known for the unique colour of its land and its rich cultural heritage. Jujuy’s Quebrada de Humahuaca (a long valley east of the central Andean Altiplano) is a UNESCO World Heritage Site. Relatively new to the cultivation of fine varieties, Jujuy is high up in the mountains, near the provincial capital. The altitude ranges from 1,700 to 3,330 metres above sea level. Summers are warm with frequent thunderstorms but the rest of the year is sunny with cool nights in the winter. Let’s visit the Moya Vineyard so we can say we’ve been to the highest in the world!

Malbec, the most planted variety is followed by Cabernet Sauvignon, Merlot, Sauvignon Blanc and Syrah. Typical of high altitude wines, they have good structure, are almost black in colour and have violet edges.

Finally, we’ll go to Tucumán, in the central north which is Argentina’s second smallest province but also its most densely populated. Located in the Calchaquí Valleys, vineyards are from 1,690 to 2,230 metres above sea level. These altitudes, the strong influence of the sun, gentle north-south winds and sandy-loam soils produce great wines. We’ll see bright colours, smell simple and spicy aromas and taste sweet flavours in fruity and ripe wines with the right balance of alcohol.

Now we’re heading to Cuyo which means “desert country”. The three provinces that make up this desert region at the foot of the Andes mountain range are Mendoza, San Juan and La Rioja. On over 470,000 acres, we’ll learn that 95% of Argentina’s grapes are planted in Cuyo. This semi-arid climate produces very little vegetation but the snow melt of the region feeds the main rivers which are augmented with man-made reservoirs and channels to irrigate the vines. It’s cold in the winter and hot in the summer.

First, at the base of the Andes, we’ll visit Mendoza which is Argentina’s most well-known wine region. For as far as the eye can see, we’ll be looking at vineyards. Mendoza’s continental climate and semi-arid desert conditions are perfect for winegrowing. With a focus on tourism many wineries are partnering with local artists and galleries. Let’s take our opportunity to take in some artistically enriching wine tasting activities.

The region covers over 300,000 hectares of vineyards. We can spend months in Mendoza and still not visit them all. Predominant varieties include Bonarda, Cabernet Sauvignon, Malbec, Syrah and Tempranillo so we’ll have lots to try.

Next stop is the second most important wine province in Argentina, San Juan in which 17% of the province is vineyards. A series of valleys spread across the center-west of the province have ideal conditions to produce fruity wines with a unique style. This province has high solar exposure, little rainfall and the soil contains a lot of sand and clay.

Syrah is the predominant varietal. We’ll easily identify San Juan Malbec from others because of interesting differences from other regions. Bonarda, Cabernet Sauvignon, Chardonnay and Torrontés are also planted here. We’ll see that red wines from these lower altitudes have violet hues and less intense aromas. Meanwhile, we’ll experience strong fruity aromas with moderate acidity and structure, green hues and medium colour intensity in the whites.

Our last stop in this region is La Rioja which has mild nights, hot days and severe drought. However, the climate makes “Torrontés Riojano”, a native varietal, thrive. We’ll visit most vineyards in the remote Famatina Valley, a dry and dusty river area at the foothills of the Andes. Famatina vineyards here are found between elevations of 1,000 and 1,500 metres above sea level. At these altitudes, intense solar radiation during the day and cool nights lead to an extended growing season so the grapes will develop both flavor complexity and acidity.

In addition to Torrontés Riojano, other varieties grown in this region are Bonarda, Cabernet Sauvignon, Malbec and Syrah.

Off we go to Patagonia. A combination of the latitude and the low altitude, abundant sun, strong winds and little precipitation are the characteristics of the provinces in Patagonia and the Atlantic regions. The red grapes have thicker skins and high colour concentration because of its climatic influences.

Cabernet Franc, Cabernet Sauvignon, Chardonnay, Malbec and Merlot grapes grow well because of these conditions. We’ll relax and enjoy sipping on La Pampa wines in a comfortable climate much like our own.

Our second stop is the Neuquén area which is concentrated in the southeast of the region. At a very low altitude of between 270 and 415 metres, it lies in the basins of the Limay and Neuquén rivers. The hot climate, cold nights, severe drought, high solar exposure and permanent winds combine to produce very healthy grapes.

Third, we’ll visit Río Negro where vines grow in an east-west series of valleys located in the basin of the Colorado and Negro rivers. Elevations range from 370 metres in the high western valleys, gradually decreasing along the rivers to 4 metres by the Atlantic. The western climate is mostly continental and dry, with low rainfall and humidity. The winters are cold while the summers are warm and dry. Vineyards remain dry and healthy because of the winds blowing off the mountains. In the lower valley of the Río Negro, temperatures are moderated by proximity to the ocean. Grapes mature slowly in Río Negro so wines stand out for their excellent balance between alcohol and acidity.

Now we’ll go to the province of Chubut which boasts being home to the southernmost vineyard in the world, at beyond the 45th parallel south. The environment is relatively hostile with extreme cold, strong winds and frost throughout the growing season. However, this translates into fresh wines with fruity notes and good acidity. Wines from this region are beginning to gain international prestige for their unique characteristics.

Let’s taste some of the Pinot Noir, Chardonnay and Sauvignon Blanc. The Gewürztraminer in these latitudes also has an amazing quality.

Last and final stop in Argentina is the Buenos Aires region located in the south. A humid climate, sandy soils, long hours of sunlight and proximity to the ocean result in grapes with high sugar content. The wind produces thicker skins which contribute to the intense colour of the wines. Here’s where we’ll enjoy fresher, more elegant wines with strong aromatic complexity.

Our final tasting includes Sauvignon Blanc and Chardonnay, however, Pinot Noir and excellent sparkling wines can also be enjoyed.

Steveston Winemakers carries red and white wines from some of the top Argentinian wine regions of the world.

I hope you enjoyed going to the world’s highest and southernmost vineyards in this article in my series about wine regions of the world – Argentina. Please share it by clicking on the share icon on the upper right corner of your screen.

Next month, we’ll explore the wine regions of Chile