Wine Regions of the World – Portugal 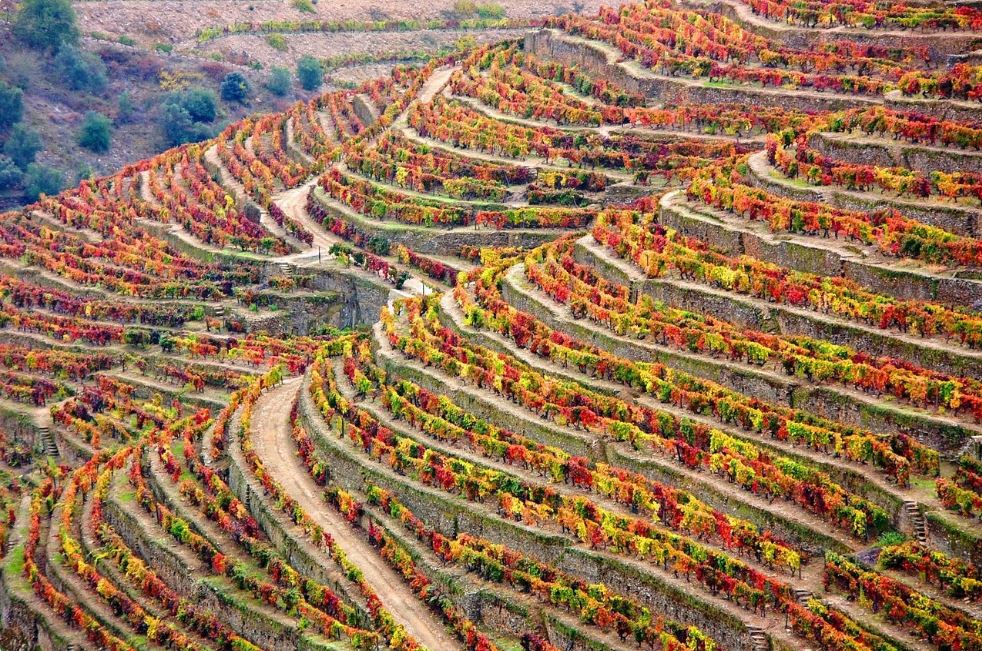 This month, we’re travelling from South Africa to explore top producing wine regions of the world in Portugal.

Portugal is known mostly for its Port Wines, but has a lot more to offer and not just other wines. Stunning golden beaches stretch along the immense coastline. In combination with exceptional sunny weather and delectable gastronomy, it’s a great vacation spot. While visiting let’s take in a soccer game or two.

Portugal has a wine rating system:

First we’ll travel northeast to the most famous wine region in Portugal, the Duoro Valley. Rocky terraced steppes on the hills along the Douro River are made of decomposed granite and schist. These have been hand-tended since the time of Jesus. More importantly, it’s so impressive that the entire region is a UNESCO world heritage site. The hot continental climate is moderated by proximity to the river.

Next we’re heading south over the mountains to a tiny mountainous region that was first planted by Cistercian monks. This area is surprisingly cooler at night which makes it considerably harder to ripen grapes than in the Douro Valley. However, this difference produces wines with much more elegance and acidity, ideal for sparkling wines. Regional wines include Malvasia Fina (aromatic white), Sercial and Gouveio (light whites), Aragonês (Tempranillo), Tinta Barroca and Touriga Franca (reds). A growing number of Chardonnay and Pinot Noir vineyards are being planted here as well.

Lastly, we’re taking a quick trip north, over the mountains from the Douro Valley, to a small wine producing region, Trás-Os-Montes. Here’s where we’ll try a full-bodied, punchy Transmontano red blend which has high alcohol level. This is usually the only wine made in this region.

Second, we travel northwest of the Douro region to Minho which is the country’s northernmost region, bordering the Atlantic Ocean. Winds and rain blow in from the ocean, creating a lush, green countryside supportive of viticulture. Vineyards here produce much higher yields than those in drier, inland regions like Trás-Os-Montes.

In the northern part of Minho, we’ll taste young wines at their peak of aromatics and crisp acidity. They’re served ice cold and pair well with salads, fish, vegetable dishes and highlight citrus-based sauces. Let’s enjoy this region’s light-bodied white wines with fruity, lemonade-like flavours and notes of melon and gooseberry. These are made with a blend of several grape varieties including Arinto, Azal, Trajadura, Loureiro and Alvarinho (Albariño). Single-varietal wines are also available, in particular Loureiro, Azal and Alvarinho.

Next we’re heading to the southern part of Minho and its sub-regions of Amarante and Paiva. Here’s where we’ll taste the reds and rosés of Vinho Verde. Let’s savour the red berry flavors which have a thirst-quenching acidity like lemonade. This region’s red grape varieties include Alvarelhão, Amaral, Borraçal, Espadeiro and Padeiro.

Third stop is south along the Atlantic coastline to the Dão region which is where collectors look for quality wines. This region is at a higher altitude with soils composed of decomposing granite and schist similar to Douro. Most vineyards are located along the Dão River, high above the shadows of the valley, so enjoy lots of sunshine. Wines here are lighter in style than in Douro and age very well because of the tannin and acidity development.

Let’s taste wine with names that contain “Dão” so we’re sure the grapes are from this region. Dão Jaen (Mencía) is a full bodied red wine with black cherry and raspberry flavours. With a moderately high acidity and a mouth drying tannin it pairs well with a rich meaty dish. Dão Touriga Nacional is also a full-bodied option with less acidity and refined tannins. Deep black fruit flavours with chocolate and mocha flavours will delight our taste buds. A medium-bodied alternative with red berry flavours, licorice and spice notes is Dão Alfrocheiro.

Terras do Dão and Terras de Lafões are Vinho regional wines of Dão that are blends of international varietals. Therefore, in these we’ll find combinations like Chardonnay, Syrah and Cabernet Sauvignon.

The Beiras region stretches all the way from the west coast of Portugal to the eastern border with Spain.

Next, we’re heading to the most interior Beira Interior region in central Portugal, a challenging mountainous environment to grow grapes. Alluvial soils from Dão, Mondego and Ceira river valleys grace this region which experiences snow and a short growing season. However, the season is very hot, resulting in reds with red-fruit driven flavors, herbaceous smoky notes and a juicy finish.

Our mouths are sure to pucker when sipping white wines having a chalky minerality. Many producers are using native yeasts and organic viticulture continually improving the quality of the product.  Let’s taste Branco Beira which are lean, chalky white wines produced from the Síria, Arinto, and Malvasia varietals.

Our second stop in the Beiras is Bairrada on the Atlantic coast which is best known for the Baga grape. Baga is a highly productive red grape which is used in the lion’s share of Bairrada wines. Because of its proximity to the Atlantic, it has a moderate climate. Soils are mostly comprised of limestone-rich clay which is perfect for the late-ripening Baga grape. Over the past 2 decades this region has experimented successfully, planting new varietals and applying new winemaking processes.

Let’s start tasting with some aromatic and delightfully pink sparkling wines produced from early picked varietals, including Baga and Fernão Pires. Then we’ll move on to the soft, structured light-bodied Tinto Bairrada which will remind us of Pinot Noir. Next up is Branco Bairrada which is made from the aromatic Fernão Pires, Bical and Arinto grapes. Finally we’ll enjoy 100% Baga Bairrada Clássico which is densely structured, blackberry-fruit driven with high acidity and a tar-like finish.

Continuing south to southern-central Portugal, our next stop is Tejo. This land-locked region enjoys a warm, dry climate. Straddling the Tejo River, vines thrive in fertile alluvial soils because of natural irrigation which means yields are often excessive. This region is mostly flat and home to large agricultural holdings where lower quality, simple table wines are the norm. The wines of this region are known for their value because they’re almost always a bargain on the wine shelf. We’re moving away from the river, into the hills and closer to the coast which is where better wines are.

Let’s taste a range of wines from lighter Alvarinho to a full-bodied blackish Alicante Bouschet. Keeping it simple, this region classifies wines in two groups Red Blends and White Blends. The blends contain both grapes from the region and also some international varietals. Reds blends include Cabernet Sauvignon, Syrah, Touriga Nacional, Trincadeira and Castalão. Whites include Fernão Pires, Arinto, Sauvignon Blanc and Chardonnay.

Further south along the coast, we’re heading to a strip of land north of Lisbon called the Lisboa region. The Serra de Montejunto hills run in a north south direction which divides Lisboa in half. On the coastal side, viticulture is challenging because vineyards are subjected to high winds and autumn rains. However, these conditions do make the terroir resistant to pests. Inland, the climate is more forgiving and because of a broad range of soils, it’s one of the most dynamic and varied regions.

We’ll taste many familiar wines from the sub-regions of Alenquer and Bucelas which are making their way into stores internationally. Lisboa wines are known for their quality and affordability so there are many great options for everyday drinking.

Most importantly, we’ll taste a 4 year old Bucelas which is a light-bodied delight made from the Arinto grape. Its strong citrus flavour is a highlight. But on the other end of the scale, a simple low-alcohol refreshing white Torres Vedras is worth a try.

Next, we’ll seek out some Coleres which is a limited and a rare find. It golden colour and full body come from the Malvasia Fina grape which is grown on the beach cliffs. It’s exciting because, this is when we get to taste some bubbly.

Our next stop is the Alentejo region located in southeast of Portugal. It’s very similar to California because of its low rolling hills of wheat, even hot temperatures and lots of sun.

Our white wine tasting experience includes wines which range from medium-bodied refreshers to full-bodied in a style similar to Chardonnay. Light-bodied aromatic wines come from Roupeiro and Fernão Pires grapes while full-bodied ones come from Arinto and Antão Vaz grapes.

Full-bodied reds and whites which include non-indigenous grape varieties from a larger encompassing area are also produced in this region. Recently, both Viognier and Syrah are growing in popularity.

Our second last stop is Algarve in southern Portugal which is famous for its beaches. Tavira which is often referred to as “The Venice of the South” is a destination for sun worshipers. The soils vary widely and include limestone-rich clays, sandstone and closer to the coastline, sandier soils. A few vineyards benefit from free-draining, mineral-rich schists but these are rare. The warm maritime climate results in wines with a higher alcohol content.

Wines produced here are not designed to be aged because extreme temperatures make it difficult to varietals having that characteristic. There is hope, in particular for red wines, with Alicante Bouschet, Syrah and Aragonês (Tempranillo). These drought-climate varieties manage more juicy acidity with smoky sweet, dusty notes on the finish similar to South Australia wines.

Our final stop takes us 1,600 kilometres west of Portugal to a volcanic archipelago in the North Atlantic. Madeira Island is famous for fortified wine which has been written about by William Shakespeare. Pico Island is designated as a UNESCO World Heritage site. Its network of stone walls each protect a vine or two of Verdelho which is the main regional white wine grape. The oceanic climate makes viticulture challenging so fortification is used.

Our final tasting on Madeira is a wine by the same name. It’s produced in a variety of styles ranging from dry wines which can be consumed on their own as an aperitif to sweet wines usually consumed with dessert.

Steveston Winemakers does not currently carry any wines from Portugal on our regular menu. However, some customers make port from our premium dessert wine.

I hope you enjoyed visiting the Port-producing center of the world in this article about wine regions of the world – Portugal. Now you know it has so much more to offer. Please share this article by clicking on the share icon on the upper right corner of your screen.

Next month, we’ll explore top wine producing regions of the world in Romania.