First, read the news articles below for candid interviews with owners of Steveston Winemakers about what it means to make your own wine. Get busy with a new hobby that’s fun, affordable and delicious. DIY craft winemaking is both art and science so why not take the leap?

Second, check out the testimonials on our home page to see what our customers have to say about both us and our products.

Finally and most importantly, know that we guarantee that when you make your own wine at our facility, you’ll be happy with the results. 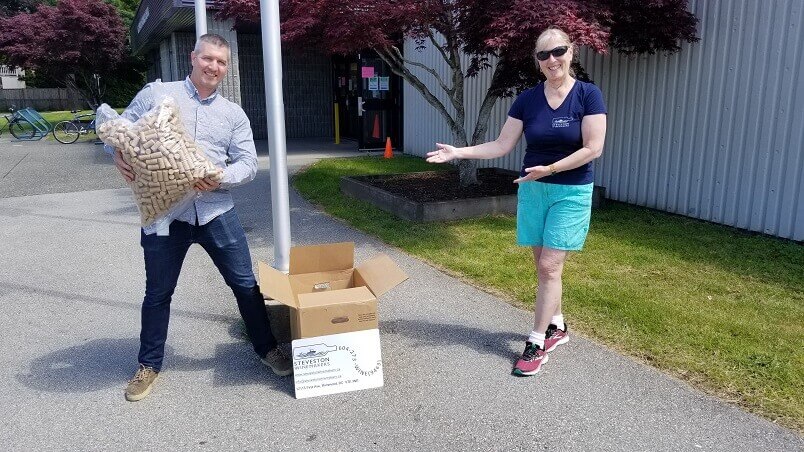 Steveston Winemakers has donated 3,000 corks to the Richmond School District

The owners can’t wait to see how the students will apply the corks in their arts, math or science programs. These are brand new synthetic corks. The business continues to supply local preschools with corks where the kids have made awesome little sailboats. “We’ve seen everything from coasters, trivets and planters to wall art, backsplashes and furniture and are loving the idea of them being applied to math and sciences.”

Craft Winemaking is the latest trend in pandemic culinary arts 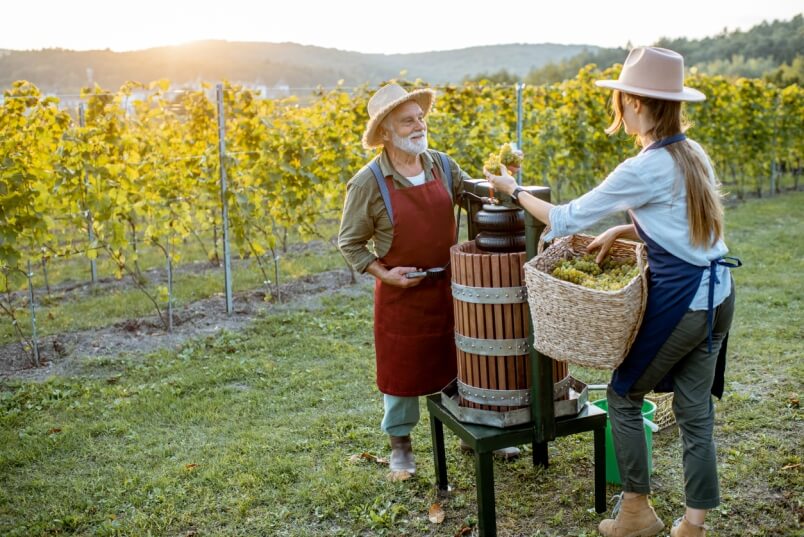 Affordability and quality are two reasons people are drawn to craft winemaking.

Adventurous food lovers who’ve had their fill of banana bread and sourdough starters are trying their hands at another homemade refreshment—craft winemaking.

Steveston Winemakers, located in Steveston Village, provides a fun and affordable opportunity to become a vintner.

“A lot of people are getting into DIY and COVID-19 has had a big influence on that,” says Bill, who co-owns Steveston Winemakers with his wife, Heather.

“It’s something new and interesting to do. You don’t just go to the store and buy your wine because you’re actually participating in the production process.”

Affordability and quality are two reasons people are drawn to craft winemaking. At Steveston Winemakers, prices range from $108 to $250 for a batch of 30 bottles, with tax only being charged on the bottling supplies.

The wine is definitely not your uncle’s homemade plonk either. Juice and grapes in the wine kits are sourced by top commercial producers from famous vineyards around the world.

“The quality of u-brew has definitely improved over the years.”

Wines made here have won awards in local and international competitions.

“The hardest part for first-timers is deciding what kind of wine to make.”

Steveston Winemakers’ knowledgeable staff is on hand to guide customers through their options.

“We ask them a lot of questions about what types of wine they like. Or if they don’t have a lot of wine experience, we ask them what they like to eat and look at wines that match up with that.”

Each batch takes approximately 30 minutes to bottle, and can be customized with personalized labels.

“For example, if people are making wine for a wedding, they can put the bride and groom’s name on a classier label with the date.”

Steveston Winemakers has been a local staple since 2000. Bill and Heather were long-time customers before taking over the business nearly three years ago.

Winemaking here has morphed into a VIP affair because of social distancing requirements. Customers make appointments and have exclusive access to the shop while they bottle their wine. The store is then thoroughly cleaned and disinfected before welcome the next group.

The business is also working on a free online Craft Winemaking 101 course that will be available on their website soon. 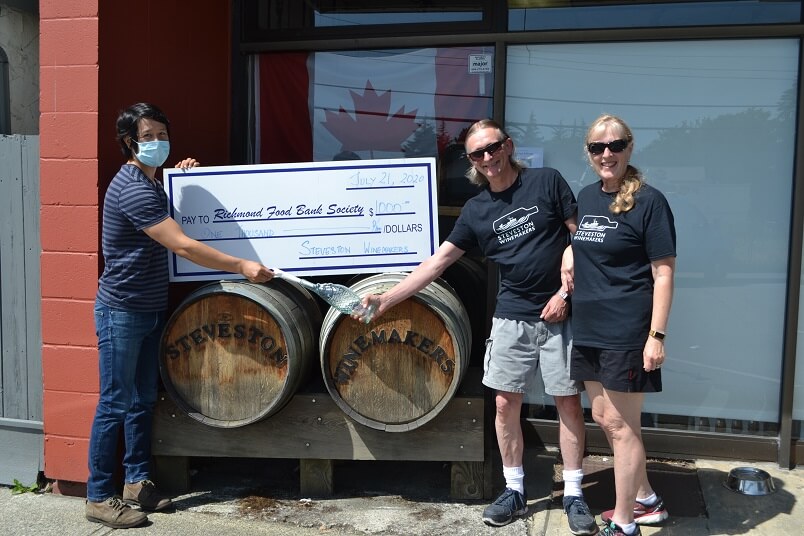 Fewer fundraising events allow owners to donate to a worthy cause.

Steveston Winemakers has donated $1,000 to the Richmond Food Bank.

The Steveston business said they chose the food bank because this “amazing charity is the best bang for your buck and it’s not government funded! Instead, 230 volunteers and many groups do the work. We couldn’t think of a worthier cause, especially during the COVID-19 pandemic.” 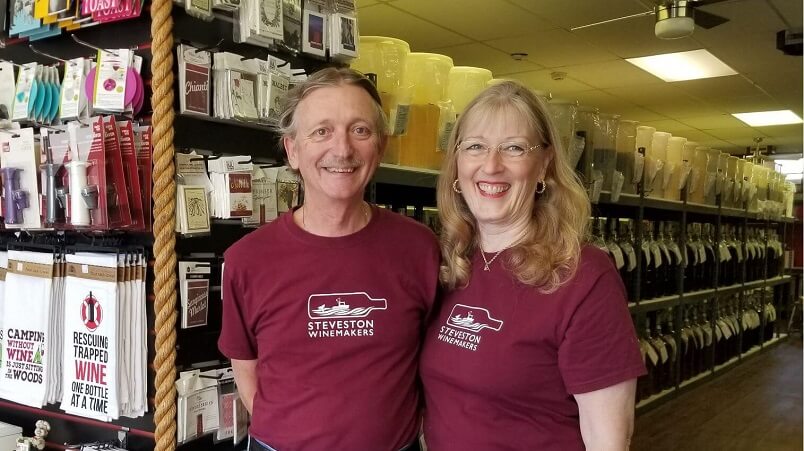 Long time customers happy to take over when the former owners retired.

After nearly two decades of being customers, one couple decided to take over their favourite wine store when the owners retired.

Bill Koopmans and his wife, Heather Hannah, purchased Steveston Winemakers just over a year and a half ago, after having been customers of the DIY-wine shop since they moved to Steveston in 2001.

And while both are getting ready to retire from their day jobs — Koopmans’ background is in IT, while his wife is a chartered professional accountant — they’re just getting started on their new venture.

The two were inspired to purchase the business, said Koopmans, as a way to give back to, and engage more with, their community.

“A great thing to do is get involved in the community through the shop and get to know some more of our neighbours. So that was really the thought behind it,” said Koopmans, adding that they had gotten to know the previous owners quite well over the past 20 years, and that the winemakers’ staff and customers are close-knit.

Most of the staff, apart from one who retired, has stayed on after the company’s ownership changed hands. And the staff know each customer’s name and wine preferences, said Koopmans — something that Koopmans and his wife Heather are working hard at.

A few changes behind the scenes

Koopmans has brought his experience in IT to the winery, creating a program to help automate the weekly process of ordering the store’s wine kits, which used to be done manually.

“It makes things easier so that I can start focusing more on the customer side of things: getting to know people and getting to know the wines better,” said Koopmans, explaining that while he and his wife have made countless wines at the store over the years, they now get to experience new wines as they learn their customers’ preferences.

Next on the list, said Koopmans, is focusing more on the store’s marketing, working with people who are looking to make wine for weddings or special occasions, and building Steveston Winemakers’ social media presence.

Make your own vino at Steveston Winemakers

As fall approaches and the weather turns chillier, there’s nothing better than having a nice full-bodied Merlot Cabernet Sauvignon to warm you up with dinner.

Making that a habit could get pricey, unless you’re buying from Steveston Winemakers where the most expensive bottle is less than $8. The caveat? You have to make it yourself, and buy 30 bottles at a time.

Located right inside the village at 3851 Moncton St., the store doesn’t draw a lot of attention to itself despite being open for the last 13 years. Walking inside, however, you are greeted with a space that is part retail and part science lab.

Most days you will find owner Sandi Wosk hovering near the front surrounded by vino paraphernalia like racks, books and wine-making kits, or in the back where there are huge jars filled with colourful liquids as far as the eye can see. She runs what is referred to as a U-Vin, the wine equivalent of a U-Brew, and says she gets the entire gamut of patrons.

“We get people who absolutely are very involved in wine and people who rather than paying $9 and up for a bottle of wine commercially coming in,” said Wosk. “They prefer to have wine made. As I was saying, they start at $3.33 a bottle and the most expensive is $7.99.”

Customers select from a series of pre-assembled kits, that yield 30 750-millilitre bottles of standard reds and whites as well as rosés, ice wines, sherries, ports and dessert wines, ranging in price from a $99 “Steveston house” blend to a $215 Austrian Zwigelt.

They open the box and start the process right in the store. And while Wosk and her staff of six can provide assistance, their U-Vin licence stipulates that the customer must do a portion of the work themselves.

The initial process is quite simple and only takes a few minutes. Kits include juice, grapes and a fining agent called bentonite that is emptied into a container and mixed, along with bits of oak for flavour if it is a fancier kit. Then, the magic ingredient that makes it all happen is added last.

“They must put, by law, the package of yeast into the primary fermenter – that’s a food-grade bucket. Depending on the quality of the kit they use, it can be four weeks, five weeks, six weeks or eight weeks. We take over from there and do all the processing. It’s a lot of work,” said Wosk.

After the fermentation has taken place, usually lasting around 11 to 12 days, the wine is then racked. That means liquid is siphoned from the large bucket into big clear glass containers – called carboys – that separates the wine from leftover leaves and chunks of yeast that have settled down to the bottom.

The final components are mixed in and then when everything is ready, a call is made to the customer to come in and package their product. Bottles are not included and are about 90 cents each for first timers, whereas seasoned veterans can bring in used bottles for sterilization and reuse. After filling, they are put through a corking machine, labelled and are ready to go.

Working in the industry since 1997 and married to a commercial wine store owner, Wosk said she has seen a different attitude develop in the way people view U-Vins.

“Thirteen years ago it was a way to get cheap wine, but that’s not the case anymore. Our customers are absolutely educated.

They know what a viognier is, which is a grape that was never know before the U-Vin industry brought it in.”

Wosk added the large foodie population in Steveston has certainly helped the cause.

For more information on Steveston Winemakers and the different kits they offer, visit their website at www.stevestonwinemakers.com or call 604-275-WINE (9463).