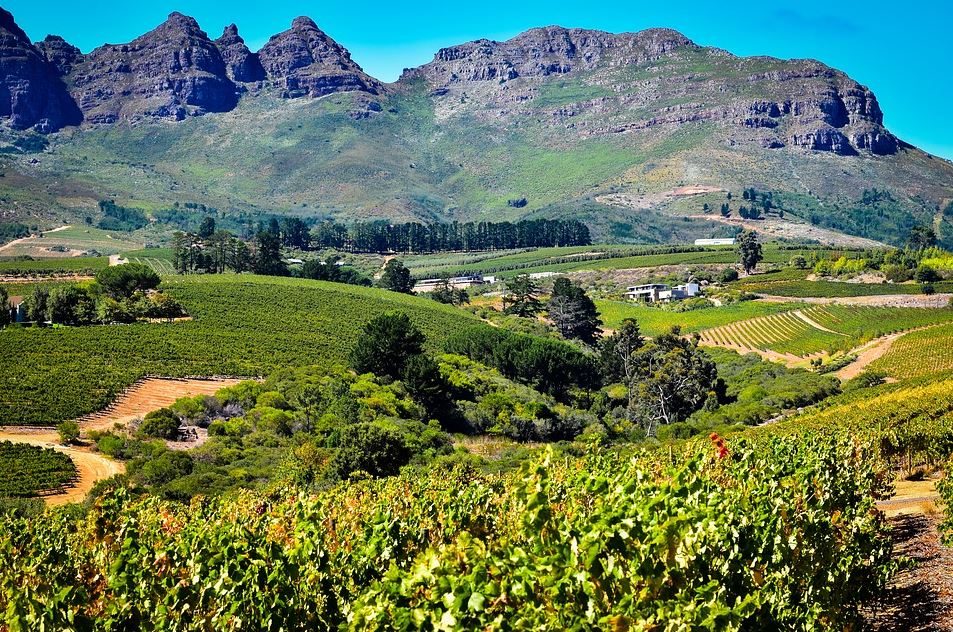 This month, we’re travelling from Germany to explore top producing wine regions of the world in South Africa. In the early 1600s, the Dutch East India Company deployed a surgeon to establish a fort and farming community in the Cape of Good Hope. Viticulture in South Africa began because wine was thought to ward off scurvy for sailors travelling the Spice Route.

Most of the country’s wine production is concentrated around the Cape. A Wine of Origin (WO) system is used to designate production regions, districts and wards (sub-districts). To qualify as a WO wine, it must only contain grapes from a specific area of origin. In addition, the Boberg appellation is unique in the WO system. It is used primarily for fortified wines from other regions such as Paarl, Franschhoek, Wellington, and Tulbagh. In this blog, we’ll focus on the South African wine regions and a few of the larger districts.

First, we’re heading to South Africa’s most recently designated wine region. In the Cape South Coast Region viticulture is young. Soils vary widely throughout the region which allows for variety in winegrowing. It’s close to the ocean so the climate is cooler and some varieties are more successful here than in other regions.

Let’s continue our adventure in the Constantia region which is the country’s oldest winegrowing region. In Cape Town’s southern suburbs, vineyards climb to 400 meters above sea level on the steep southeastern slopes of Constantiaberg Mountain. Because they sit on ancient deposits of decomposed granite, sandstone and loam, soils are well-drained and fertile. A high clay content absorbs water through the wet winters so vines are hydrated during the dry summers. The lower slopes get longer solar hours so Bordeaux varieties like Cabernet Sauvignon and Merlot thrive. Mountain shade and constant sea breezes mean vines are healthy because they need deep roots to access nutrients. There’s a cooler climate which is perfect for Sauvignon Blanc.

This region gained worldwide fame in the 18th and 19th centuries because of its production of the legendary dessert wine Vin de Constance made from Muscat Blanc. Let’s start wine tasting by visiting the Groot Constantia Wine Estate which was founded in 1685.

Next, we’re travelling east to South Africa’s most famous wine region which is home to its best known wine estates. The gently rolling hills of the Stellenbosch region are surrounded by the Helderberg, Simonsberg and Stellenbosch mountains. Soils near the mountains are primarily decomposed granite with sandy, alluvial loam in the river valleys so they are well-drained and fertile. The high clay content absorbs water so vines are hydrated during the dry season which minimizes the need for irrigation. Proximity to False Bay tempers the relatively hot and dry climate. As a result of the wide variation in terroir throughout the region, many different sub-regions exist.

Terroir comes through in the reds, particularly Cabernet Sauvignon, Merlot, Pinotage and Shiraz. Chardonnay and Sauvignon Blanc are often blended together while Chenin Blanc is also produced. The highest rated winery at Delaire Graff Estate is a place we will appreciate wine and also art.

Now we’re heading north to the Paarl region which is home to some of the best known wineries in Western Cape. Vineyards grace the lower slopes of Paarl Rock, the northern side of Simonsberg Mountain and also along the Berg River Valley. Mountain soils are composed of granite and shale so they are well drained. Vineyards on the upper mountain slopes need to dig deep for nourishment which makes them strong. Yields are smaller but wines are premium quality. The valley soils are sandstone based. This inland region’s cold, rainy winters aren’t enough to cool plants during the long hot summers so irrigation is needed.

Next we’ll head even further inland to the Breede River Valley which is surrounded by the Langeberg, Boland and Riviersonderend Mountains. There’s a wide range of terrain which allows for growing several varieties. Bulk winegrowing happens on the valley floor near the river because soils are primarily alluvial with some sandy loam. Premium winegrowing happens in the foothills because soils mostly shale, sandstone, limestone and gravel. The cold winter months are when the rain comes but they are not enough to irrigate during the hot dry summers. Therefore, the abundant waters in the river and the Brandvlei Dam are used for irrigation.

Now, we’re eastward bound to Klein Karoo which is located in a valley between the Swartberg and Langeberg Mountains. Vineyards lay along the riverbanks and also on the foothills up to 700 metres above sea level. Red, alluvial riverbed soils have good drainage but need lots of irrigation during the hot, dry growing season. The region is sheltered from influences of the Atlantic and Indian oceans so vines in the foothills enjoy a more temperate climate. Mountain soils here are deep and fertile.

The region is famous for fortified wines which are made from Muscat Blanc a Petits Grain. We’ll also find dry Chardonnay, Cabernet Sauvignon and Portuguese varieties such as Tinta Barroca. Let’s do some tastings at the Karusa Winery.

Finally, we’re going to visit one of the northernmost regions in the Olifants River Valley. Located west of the Cederberg Mountains, it’s quite flat in the north but mountainous in the centre and south. Soils vary considerably along the river valley so many different varieties of grapes are grown here. Because of its diverse topography, there’s a wide range of climates, all benefiting from cooling breezes off the Atlantic.

We’ll enjoy some herbaceous white Sauvignon Blanc and Chenin Blanc wines which are from cool coastal areas. Also some Cabernet Sauvignon, Pinotage and Shiraz from the mountain areas. Let’s complete our tour at Cederberg Private Cellar, which is on the highest lying vineyards in South Africa.

Steveston Winemakers carries red and white wines from some of the top South African wine regions of the world.

I hope you enjoyed seeing where the Atlantic and Indian Oceans meet in this article in my series about wine regions of the world – South Africa. Please share it by clicking on the share icon on the upper right corner of your screen.

Next month, we’ll explore the wine regions of the world – Portugal.