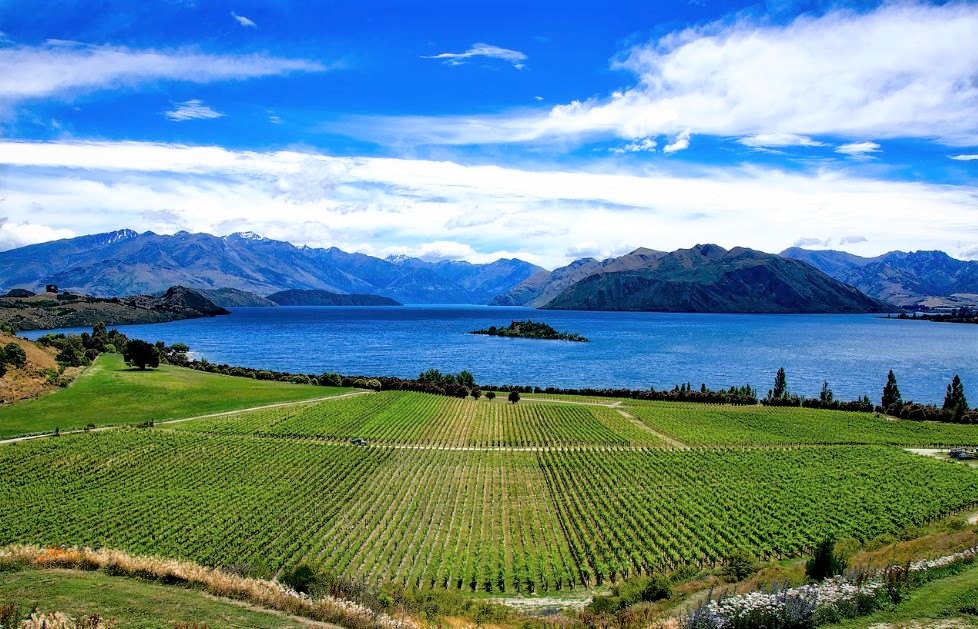 ​This month, we’re travelling from Hungary to explore top producing wine regions of the world in New Zealand. Therefore, we’ll be visiting the world’s most southern wine producing country. Winemaking here, which dates back to the early 1800s, survived the phylloxera epidemic in the late 1800s. Its modern wine industry began in the mid-1900s, which is when it expanded rapidly. Let’s explore its top 4 wine regions which are Gisborne, Hawke’s Bay, Marlborough and Central Otago.

Our first stop is the Gisborne region which is where Captain Cook first made New Zealand landfall in 1769. It’s located on the east coast of the North Island of New Zealand. Early settlers came here with vines in the 1800s, thinking they were at Hawke’s Bay but were mistaken.

Soils composed of silty loam and limestone are found on south facing slopes, while heavy clay is in river valleys. Plenty of sunshine which is moderated by sea breezes makes the region one of the most reliable in New Zealand. Annual rainfall is low which means vines produce smaller, more concentrated berries.

Let’s visit a few wineries for a taste of Gisborne’s Chardonnay, Chenin Blanc, Gewürztraminer and Viognier. We can also take in some Malbecs and Merlots.

Our second stop is the Hawke’s Bay region, also on east coast of the North Island but southwest of Gisborne. Vines here were first planted 1851 by Marist missionaries whose legacy is historic Mission Estate Winery which we plan to visit.

There’s so much variety in the terroir so a lot of different grapes succeed here. Soils are mostly volcanic but there is also free draining sand, clay and heat-retaining gravel.

Hawke’s Bay’s enjoys a maritime climate which means the climate is moderated by the Pacific Ocean. Lots of sunshine during warm, dry summers and long autumns also mean a long growing season.

Our third stop is the Marlborough region which is at the northeastern tip of the South Island. Because of its size, it produces a large majority of New Zealand wines. Each sub region has its unique terroirs and climates the range of grape varietals grown is huge.

The Wairau Valley is a river flood plain so it has very diverse soils from river rock to alluvium. The climate is warm and sunny which is moderated by cooling winds from the Pacific Ocean.

The Southern Valleys have soils which are composed of glacial outwash, stony gravels, clay and loess-covered hill slopes. The climate is a little cooler and drier because it’s moderated by the Wither Hill range.

The Awatere Valley is mainly river terraces and flood plains so soils range from alluvial gravels to clay and loess. The climate is cooler and slightly drier because of its proximity to the ocean both to the north and east.

Let’s go to a winery in each sub-region so we can taste the influences that terroir and climate make on the wines. We’ll try a Sauvignon Blanc from each and also some Chardonnay, Pinot Gris, Riesling and Pinot Noir.

Finally, we’ll enjoy the spectacular landscape of the Central Otago region which was gold rush territory in the 1800s. It’s near the bottom of the South Island where glorious snow-capped mountains and also glistening rivers run in deep ravines.

Dry soils are low in organic matter but high in mineral content. Mostly mica schist and greywacke, there are also clay, loam and loess soils.

A dry climate along with extreme seasonal temperature variations also means a short and intense growing season. Most vineyards are located on hillsides, angled toward the sun.

Let’s finish our wine tasting tour with some Pinot Noir, Chardonnay, Riesling, Pinot Gris and of course we also have to have one more Sauvignon Blanc.

I hope you enjoyed visiting the historic landing point of Captain Cook on this tour of wine regions of the world – New Zealand. Please share it by clicking on the share icon on the upper right corner of your screen.

Next month will be the last in this blog series as we explore the wine regions of world in Canada.