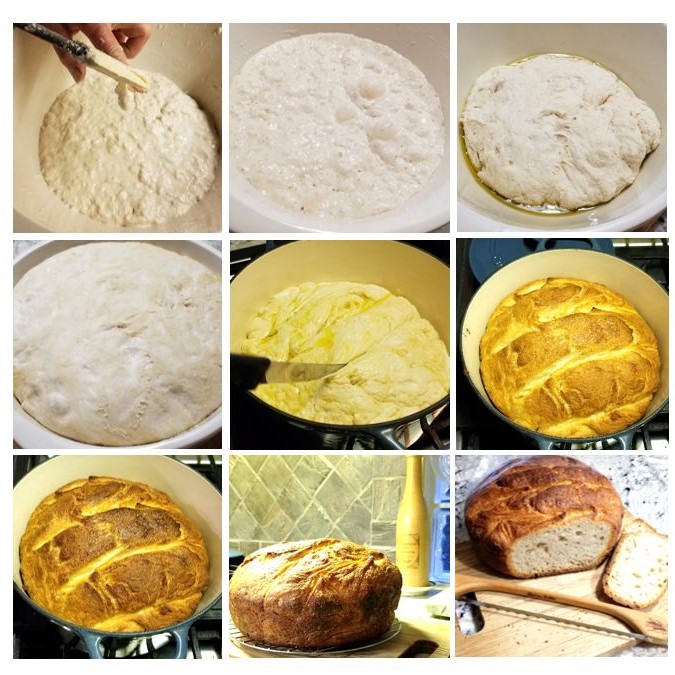 The impetus for me to try making Champagne yeast bread was when I discovered that COVID-19 is impacting the supply of yeast. A couple of weeks ago, when I was in our local grocery store, I overheard that it would be at least two months before more would be on the shelves. Owning a UVIN, I have an abundant supply of EC-1118 (Champagne yeast) that is used in wine and fruit fermentation.

My theory was yeast is yeast but I suspected the results might be different. I wondered what Champagne yeast bread would be like so I started the experiment.

I chose to follow a sourdough-type process which began by creating a “starter”. Using a one quart Mason jar, I added 6 tsp of flour and 1/4 tsp of sugar. In a separate container I added 2 TBSP warm water to 1/2 tsp of Champagne yeast and let it bloom. I mixed it until all the yeast was dissolved and poured it into the contents in the Mason jar. For the next 24 hours, it sat on the counter, covered with cheesecloth which was held in place by an elastic band.

After 24 hours, the starter had been busy so it was doubled in volume. I decided it was time to create the starter dough. In a large bowl I mixed 1 cup of the starter, 2 cups of warm potato water, 3 cups of flour and 2 tsp of sea salt. Because it’s still a cooler season, I added an additional 1/2 tsp of Champagne yeast. Then it sat on the counter, covered with plastic wrap for 12 hours.

After 12 hours, the starter dough had more than doubled so it was time to prepare the dough for rising. Adding 1/2 cup at a time I sprinkled 2 and 1/2 cups of flour over the dough and hand-mixed it. Working from the outside of the bowl and folding inward, once it became elastic, it was time to stop.

Then I greased a fresh bowl with about 2 TBSP of extra virgin olive oil. I gently placed my dough in it, covered it with a tea towel and placed it on the counter for 6 hours.

After 6 hours, the dough had risen to the top of the bowl. I preheated the oven which had a cast iron Dutch oven inside to 450 F. When the oven reached temperature, I took the Dutch oven out and spread 1/2 tsp of cornmeal in the bottom. Then, I gently poured the dough from the bowl into the Dutch oven. Using a sharp knife I made my mark by creating a pattern of shallow troughs across the top.

With the lid on the Dutch oven I baked the bread for 45 minutes. After 45 minutes I removed the lid and left it in for another 10 minutes. Next time I’ll leave it in for 5 minutes at which time it was a more of a golden brown.

Bet you can’t wait to eat it!

This bread is wonderful however, unlike sourdough, there isn’t any tartness to it. I‘ve saved the starter and will subject it to the regular sourdough practice to see if it has any impact on the taste. In the meantime, I’ve found a way to make delicious hearty bread using yeast normally used in libation fermentation.

Bet you can’t wait to try it!

To any of our customers, current or future, I want you to know that we have an abundant supply of Champagne yeast in our store if you’re interested in trying this bread recipe. Call (604) 275-9463 to pay by phone and arrange a pickup time. Happy baking and I hope you’ll enjoy your Champagne yeast bread.