Wine Regions of the World – Germany 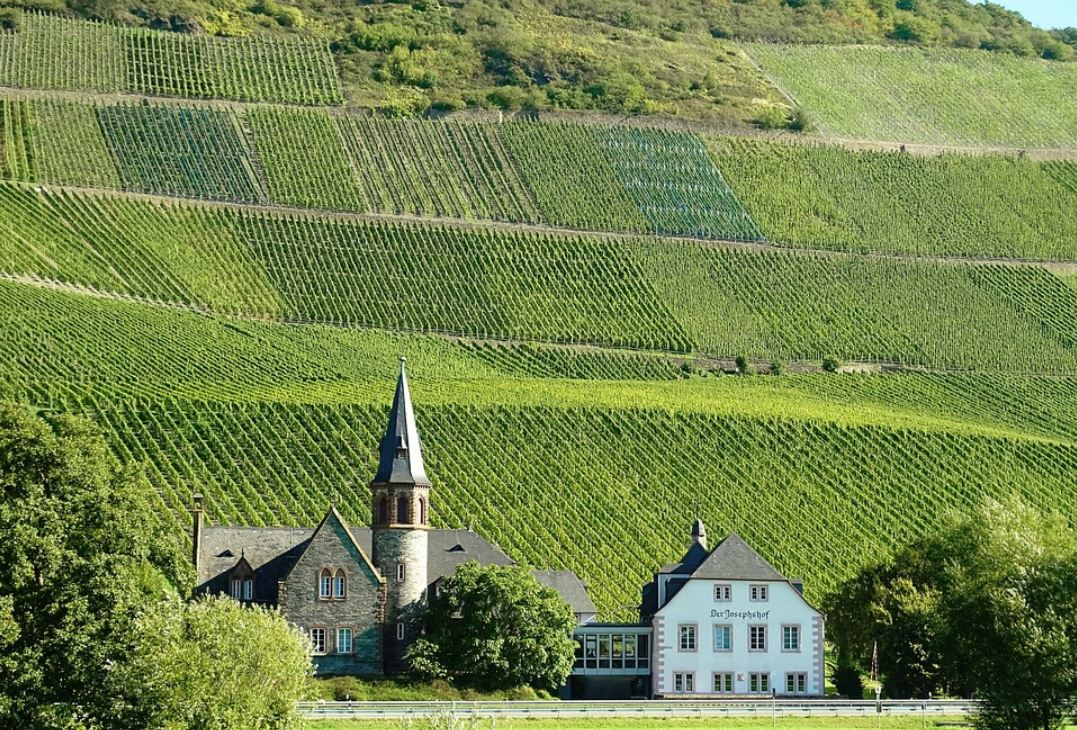 This month we’re travelling from China back to the old world to explore top producing wine regions of the world in Germany. The majority of Germany’s top regions are concentrated in the south along the Rhein. Moderate temperatures during the summer results in lower levels of alcohol in German wines.

Germany produces numerous distinct wines which is largely due to the variety of soil type and grape varieties. We’re starting our journey about mid Germany on the eastern side close to the border with Poland.

First we’ll visit the Saschen (or Saxony) wine region which has a history dating back to 1161. The Saxon Wine Route starts at Dresden and stretches northeast to Diesbar-Seusslitz which is where most of the wineries are. South of Dresden efforts are underway to restore some smaller vineyards which are planted on very steep, stone terraces. However, the terrain provides a labour intensive environment in which to produce wine. Soils in the Elbe River Valley include granite, feldspar and also some mica, quartz and sandstone.

The Elbe River’s proximity tempers the climate and favours the production of early-ripening Müller-Thurgau varietals. This region is known for their specialty Gewürztraminer.

Then we’re off to the hillsides lining the Saale and Unstrut rivers which have vineyards cultivated since 998 AD. The Saale-Unstrut region is among the most northern of Europe’s traditional wine regions. At this northern latitude which has a cooler climate so the weather is more variable. Soils in these valleys include shells, limestone and sandstone. The vineyards are also built on labour intensive stone terraces to help temper the weather. Most wines in this region are white and dry varietals.

The most widely planted grape is Müller-Thurgau which accounts for 20 percent of the total vineyard area. Pinot Blanc, Silvaner and Riesling are also grown in this region.

Next, we travel west and slightly north to the Ahr which is the smallest wine region in Germany. The terroir is also stunning, with terraced cliffs on volcanic slate that add a unique charm and beauty to the region. The slate affects the grapes which produce distinctive wines that won’t be mistaken for any others from Germany. In this cool climate, vines are planted primarily on the south-facing hills to maximize sunshine which is needed for ripening.

Four out of five bottles of Ahr wines are made from Pinot Noir (Spätburgunder) which is the predominant grape varietal. Ahr is renowned for its stunning red wines which are full bodied and fiery. We’ll also find Dornfelder, Portugieser and small pockets of Riesling and Müller-Thurgau varietals.

Now, let’s travel south along the Rhein to Mittelrhein which has castles and ruins creating splendid scenery. Steep, terraced vineyards lay amid the Rhein Gorge which has deep, stony, free-draining soils. The terroir includes dark slate, greywacke, loess-loam, quartzite and clay which is needed for wines with higher acidity. The mild climate means there is an extended growing season.

The Riesling grape is king of this region which represents three quarters of the grapes planted. These are often used for making Germany’s sparkling wine, Sekt which is where high acidity is an asset.

Get ready for a romantic wine tour adventure as we travel to Mosel which has some 2,000 year old vineyards. Therefore, it’s no surprise that projects in the valleys of the Mosel River and its tributaries have unearthed treasures. Wine-related artifacts and press houses are just some of those treasures. From where it meets the Rhein River near Koblenz, we’ll follow the Mosel River southwest to the Luxembourg and France borders. There are almost 9,000 hectares which makes this region the fourth largest in Germany. The continental climate and sloping hills maximize the sunshine which is needed for ripening.

The Riesling grape dominates and from the Saar and Ruwer valleys the slate soil yield wines of incomparable delicacy. These are fragrant white wines, rich in acidity and fruit flavours, which often have floral and mineral undertones.

Let’s travel now to the Rheingau region which is rich in tradition. In the 18th century vintners recognized the value of harvesting the Riesling crop at various stages of ripeness. This created special attributes that denote wines of superior quality which is how “Spätlese” evolved. Spätlese is means wine from fully ripe grapes which is the lightest of the late harvest wines. From Wiesbaden to Rudesheim, we’ll see the Rhein River‘s south-facing slopes which are home to most of this region’s vineyards. One of the most distinguished wine regions of the world, Rheingau’s landscape starts off flat and evolves into progressively steeper slopes heading westward. This region has a cool continental climate because of its proximity to the river.

There are two predominate varietals in this region Riesling and Spätburgunder (aka Pinot Noir). Riesling accounts for 80% of the production and these are elegant white wines which sometimes have a spicy fragrance. They are fruity with pronounced acidity and also a rich flavour. Spätburgunder wines produced are velvety and medium- to full-bodied, with a bouquet and taste often compared with blackberries.

Off we go to the largest region in Germany, Rheinhessen, which has a quarter of the German vineyard surface. The valley has a lot of gentle rolling hills so steep vineyard sites are limited to small areas. We’ll find them near Bingen and south of Mainz along the Rhein Terrasse. Because of its size, many different soil types and climates produce a wide variety of old and new varietals.

The ancient varietal Silvaner can be found in the region in larger quantities than any other region. Looking at newer varietals the region has developed a substantial crop of Rheinhessen. Rheinhessen offers easy-to-drink wines and also wines of great class and elegance, with a depth and complexity second to none.

Next stop is the Nahe region which is named after the river that gently flows toward Bingen on the Rhein. It’s one of the smaller German wine regions that also boasts an extraordinary range of soil types and microclimates. Therefore, it allows the region to produce diverse wines from relatively few grape varieties.

The steeper sites tend to be volcanic or weathered stone and red, clayish slate which produce sharp Riesling wines with a light spiciness. The flatter sites tend to have loam, windblown sediment and sandy soils where vineyards are famous for fragrant Müller-Thurgau (Rivaner) wines with a flowery notes. We’ll also find the underrated, neutral-scented Silvaner grape which is a historical grape that thrives in a number of soils and produces full-bodied, earthy wines.

Now we’re travelling to Hessische Bergstrasse which is the smallest region in Germany. It’s named after an ancient Roman trade route which follows the eastern bank of the Rhein between Darmstadt and Weinheim. It has a pretty landscape of vines and orchards which are scattered on hilly slopes. Soils include decomposed granite, sandstone, quartz and also some loess. The climate is mild which provides ideal conditions for viticulture.

Riesling, Pinot Blanc and Pinot Noir are the most important grapes in this region so get your taste buds ready. Wines here tend to be fragrant and rich, with more body, acidity and finesse, similar to those of the Rheingau. Most of the wines here are consumed locally so this is your best chance to enjoy them.

Let’s travel east of Frankfurt to the hilly region of Franken which follows the winding Main River. The cooler climate here is mitigated by proximity to the Main which has many tributaries. Climate and also soil types of this region make it known for earlier-ripening white grapes, for instance Rivaner and Bacchus.

Above all, the region is known for its powerful, earthy Silvaner wines as well as its dryer styles. Riesling grapes are also found in this region, but take a back seat to the others. Franken wines are distinctive in presentation because they’re bottled in “Bocksbeutel”. It’s a flat round bellied bottle with a flagon-like appearance which is designed not to roll when on its side.

Next, we travel to the Pfalz region which has 23,000 hectares which makes it Germany’s second largest wine growing region. South of the Rheinhessen region between the Haardt Mountains and the Rhein River, it lies north of France‘s Alsace region. The climate is similar to Alsace so it’s one of the sunniest and driest in Germany. Soils vary so we’ll find sandstone and limestone the north and. Marl, loess-loam and granite in the south. There are also some areas of slate.

Everyone’s taste is sure to be satisfied because more than 40 white and 20 red grape varietals are grown here. Whites dominate because they cover 60% of the area. Riesling grapes grown here are popular because the wines have substance, finesse and less acidity than their Mosel counterparts. Also, green fruit flavours and aromas are replaced with peach and apricot.

A wide variety of mild white wines with full bouquet and body are produced so these are great for daytime. We’ll find Müller-Thurgau, Grauburgunder (Pinot Grigio), Weißburgunder (Pinot Blanc) and Scheurebe grapes. On the red side we’ll find the smooth, fruity red wine is made from the Portugieser grape. There’s been increasing demand for more red varietals so we’ll find many new plantings of Dornfelder. These grapes also produce a deep-coloured and complex wine. Pinot Noir is also found here and remains one of the most important red varieties grown in the Pfalz region.

Next, we’re visiting Baden which stretches 400 km along the Rhein River the southernmost region in Germany. The region encompasses the Black Forest, as well as the volcanic vine-clad terraces of the Kaiserstuhl. The climate is generally warm and sunny so it’s perfect for viticulture. Baden has a long tradition of wine and food going hand in hand so pairing is important.

Dry Burgunders (Pinot Blancs and Noirs) are most popular in the region because they pair well with local food delicacies. Rivaner vineyards are also widespread, while other classic whites such as Riesling, Silvaner and Gutedel are more localized.

Finally, we visit the rural, hilly region adjacent to Baden and south of Franken known as Württemberg. Metropolitan Stuttgart and Heilbronn, which are the wine centres of this region, have vineyards spread throughout the Neckar River Valley. The cool continental has cold winters, warm summers, and plentiful rainfall which is ideal for winegrowing. Württemberg‘s soils are quite diverse so we’ll see limestone, loess, clay, marl and keuper.

Red wine predominates in this region and also ranges from light to full bodied wines. Trollinger which is the ‘Swabian national drink’ is crisp and light. Schwarzriesling (Pinot Meunier) and Lemberger which have richer colours, body and substance are also produced. In whites, Riesling is by far the most important, followed by Kerner, a crossing which has similar beginnings to Riesling. About 80% of wine produced in the region is from 50 cooperatives which are established there. Most vineyards supply these cooperatives because there are only a few independent wineries.

Steveston Winemakers does not currently carry any red wines sourced from Germany. We do however have an excellent selection of German white wines such as our Riesling Gewürztraminer blend, and multiple selections of Müller-Thurgau (Rivaner) and Gewürztraminer.

I hope you enjoyed visiting more wine regions of the world in Germany. Please share this blog by clicking on the share icon on the upper right corner of your screen.

Next month, we’re off to South Africa to explore another of the top producing wine regions of the world.